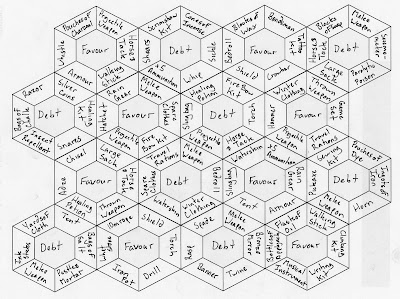 This is for starting equipment for Kadiz PCs. Each PC drops a bunch of d6s onto the map (I recommend 4-6) and gets the items the dice land on, with the quantity of the d6 showing how many, except in the following cases, where you only get one of the item:

Armour - The number on the d6 tells you how many points of armour it provides.

Healing Potions - You only get a single healing potion, with the d6 indicating the magnitude of the healing it has.

Healing Kits - The d6 indicates how many uses it has.

Landing on "Favour" allows you to choose any one item listed on the map and take one of it.

Landing on "Debt" allows the referee to choose any one item you own and remove it from your inventory.

This roll represents what your sept is able to lend you when you begin your adventuring career. Later on, it can be rolled to figure out what they have on hand at any given time in case you want to get more stuff.

Kadiz septs are communistic internally (like most families), so PCs may take what they wish, but they will be responsible for anything that is lost or damaged, and their possessions in turn may be taken by other members of the sept without notice. Objecting to this is considered extremely rude, especially if the person is older than you, but in actual practice most people have a small number of personal effects that no one will take without asking them first.

Septs of the same clan, and allied or friendly clans operate on a gift economy. PCs are encouraged to trade the various goods that their sept gives them to one another (so if one PC has two sets of armour, it would be wise to give one to another PC) as gift-giving increases the prestige of the gift-giver's sept.

Unfriendly clans will engage in barter with one another, and exchanges between the Kadiz and Hill People often take this form. Reparations for various crimes including murder and abduction also involve direct payment, though if the wrong-doer genuinely wishes reconciliation they may indicate that by paying more than the assessed price.