The Tellian Sector, complete with map, planetary profiles, and a listing of active espionage organisations in the Tellian system itself.

My overland travel reference sheet for the Moragne campaign.

The primer for my Moragne campaign.

My potion tables for use with my alchemy rules. These are built off of procedural metapharmacology.

Iron Heartbreakers v. 1.52, my Microlite20 swords and sorcery game inspired by Iron Heroes. It's ideal if you want low or no-magic PCs.

The Necrocarcerus v. 1.1 rules document as well as a map of Necrocarcerus showing rail connections. Also, a copy of the wandering monster table for SAFE AREA DUVANOVIC, a mini-campaign setting within Necrocarcerus that I'm writing.
No comments:

Reviews: Relics of the Lost / Engines of Babylon

I'll admit I can't figure out the numbering system for Stars Without Number supplements. Polychrome is W1, Relics of the Lost is W2, Engines of Babylon is W3, but Darkness Visible, Suns of Gold, Skyward Steel, and Dead Names are all unnumbered, as are the Mandate Archives. I've already reviewed the Mandate Archives, Darkness Visible and Polychrome, and I'll be writing reviews of Skyward Steel, Suns of Gold, and Dead Names shortly.

Relics of the Lost and Engines of Babylon are sort of a natural pairing beyond their numbering because they are both gear books for Stars Without Number. Relics of the Lost is focused on pretech (SWN's equivalent of magical items), while the core of Enginess of Babylon is the vehicle and slowboat rules, though both books have thematically overlapping sections. For the record, I think they should have been merged into a single large gear book similar to MongTraveller's Central Supply Catalogue because of the extensive thematic overlap, but I'm not too chuffed about it.

Relics of the Lost is a 32 page book with sections on weapons and armour; medical devices (mainly stims, the healing potion-equivalent in SWN); pretech consumer goods (miscellaneous magical items); robots; maltech, and some random loot generation tables to insert them into adventures. A few of the tables in it look like they were recycled, adapted or updated from The Dust, one of the Mandate Archive supplements that had the original pretech generation rules in it. Some of the information around maltech is adapted from Darkness Visible. I think the reuse of the Dust tables is fine, but the treatment of maltech is somewhat weak in Relics compared to Darkness Visible, and the treatment in Relics' maltech section veers away from the concreteness of the rest of the book's material. The maltech isn't intended for PC use, but it might be nice to provide a set of sample procedures for ghoul immortality, or a list of time-bomb devices / situations for NPC villains to have as goals.

If one wanted to avoid getting too bogged down with the mechanics, a set of tags related to each one that could be slotted into the SWN adventure-creation system would be ideal. "Roll on this table for your Allies, Enemies, Complications, Places and Things if you want to run an adventure where a ghoul immortality cult is the main villain" would be ideal, as well as being new material that wasn't in Darkness Visible. Dead Names and Engines of Babylon split the difference here (adventure material for weirdo transhumanists and concrete maltech devices, respectively), so it's unfortunate Relics doesn't. I think this might be an artifact of it originally being a stretch goal of the Stars Without Number Bundle of Holding.

Despite that complaint, the book is generally strong. Like all good gear books, it's mostly very concrete, with items statted up and variations noted. One particularly strong element of the descriptions is that they mostly list what the original use of the item was in the pretech era (the ancient galaxy-spanning technologically advanced era that precedes the default setting for SWN and justifies the existence of ruins and mysterious wonders). This helps the referee decide what kinds of gear from the book might be appropriate for different ruin locations.

Of its sections, I liked the one on stims the most, since it took a boring but necessary component of the game (sci-fi healing potions) and provided a number of options for making them interesting. I think some of this material is recycled or adapted from Other Dust, but a lot of it is new and interesting. In particular, the stim manufacturer brands at the end of the section, complete with mechanical differentiation between them, is a nice touch.

The sections on robots and consumer items are also strong. There are eight kinds of robots listed that would be appropriate for pretech sites, and a couple are very cool and interesting, particularly the culler and the kami. The culler robots are basically murderbots that harvest your organs to make anagathic drugs, while the kami are nanite clouds that form drone to attack you.. Stats are given so that if you have an AI PC, you could have them use any of the robots as armatures. The consumer items section fills out the "miscellaneous magical items" list for SWN, and is mostly colourful, interesting and useful while being plausibly weird.

Engines of Babylon is a 41 page supplement dealing with gear. I like it a lot as a supplement, but I'm going to list one format complaint here. Both it and Dead Names have some new sans-serif font for their body text, instead of the typical font used by the rest of the line. It looks like Verdana or another screen-based font and makes them harder to read in print (at least for me). I don't know why the decision was made, but insofar as my vote counts for anything, I'd encourage the return to the old SWN body font (which looked like Aldus?). It's a minor complaint though.

The book is split into sections dealing with vehicles (including vehicle creation, vehicle operation rules, and sample vehicles; sublight or slowboat ships (including creation and operation rules); some more magical items (in general ones that are more powerful than in Relics of the Lost) and maltech devices. Despite thematic similarities in the last two sections with Relics of the Lost, the material is entirely new.

Vehicle and slowboat creation are basically variations of the starship creation and operation rules in the SWN corebook, though they have entirely new module options in both cases, including some cool pretech fittings for vehicles. The example vehicles and slowboats are pretty solid, and cover most of the common options you'd want. The slowboat section has two pages of material on using slowboats in games, including how combat between them differs combat involving spike drive-capable ships with "Quantum ECM" (SWN's handwavium for why intelligent drone-missiles don't dominate space combat, previously established in Skyward Steel and the corebook).

The section dealing with the pretech items differs a bit from Relics of the Lost in a few subtle ways. The items in Engines tend to be more powerful, but also more easily exhausted or expended than in Relics (where most items either work fine, or just need batteries). It reads like the items in Engines were designed to be either the goal or spark for an adventure, whereas most of the items in Relics feel more like "loot" you'd get during an adventure. There's also some nice work making a lot of the items here feel more like the extravagant decadences of long lost Mandate directors rather than another cool space TV.

The maltech section in Engines is nicely concrete and appropriately horrific. I particularly like the telekinetic mining equipment that floods prisoners with psychic energy at the cost of their lives and sanity while allowing an evil telekinetic to literally tear apart a world with their powers. I think it's got some interesting allegorical heft, as well as being a really interesting device to structure a set of adventures around - both while it's in the bad guy's hands as well as once it falls into the PCs. The rest of the devices are similarly interesting, including stuff to make people god-kings, destroy stars, and genetically tamper with enemies.

Broadly speaking, the difference I elaborated above between Relics and Engines is the key decision point if you're only planning to pick up one, or trying to decide which your game needs. Relics is at its core a "loot" book, with lots of stuff designed to be used by PCs without breaking the game or trivialising all their problems. Engines is (mostly) a set of game-changing items that you could build entire stories around, with a few modular add-ons to provide richness to specific activities.
No comments:

Email ThisBlogThis!Share to TwitterShare to FacebookShare to Pinterest
Labels: Review, Stars Without Number

Here's some screencaps of the Realtimeboard that I use to run and track things for the Necrocarcerus campaign I'm running on Google Plus. Of the various whiteboard programs I've looked around at, Realtimeboard seems to be the best for my purposes. I use the free version, and if I could improve the program in any way, it would be for Google Hangout integration, so I could use it in real time while playing. As it stands, it's mainly a repository for campaign information.
This is the map of End-of-the-World and surrounds, out in the Far Lands of Necrocarcerus, where the campaign is set. It includes both areas the PCs have visited and explored, areas they've received some sort of direction to. The pictures may not show it, but there's a grid (though this map doesn't really use it). 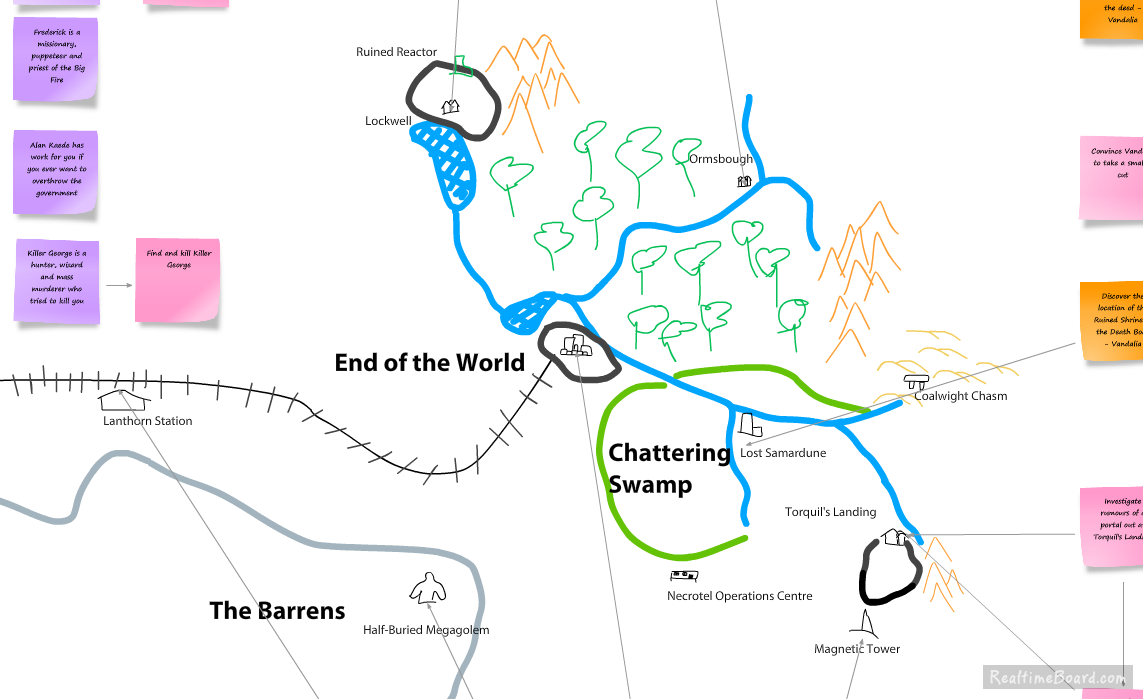 I use the post-it notes to track quests. Purple is a quest-giver contact, orange are open contracts, and pink are leads, ideas, and tasks requiring PC motivation. This is the top half of the map with its quests. Also, it isn't shown here, but each of the locations has a comment bubble on the actual board that contains an update about what's happened there recently. 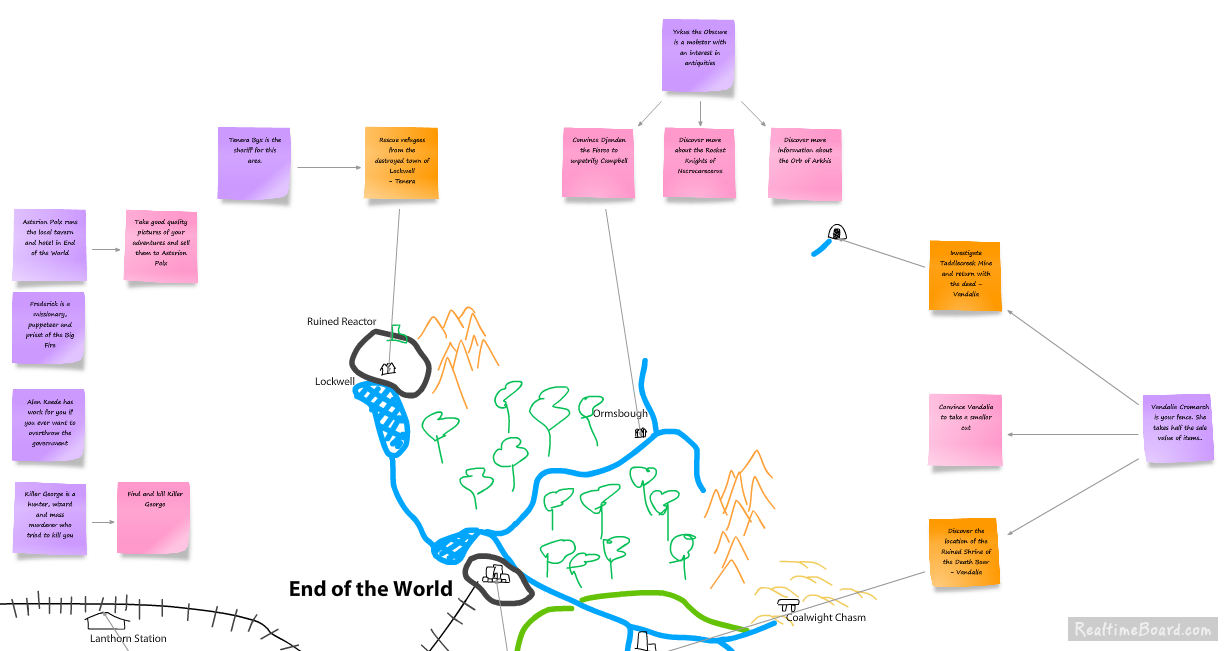 This is the bottom half of the map with its quests attached. This is a "player-friendly" map - everything on it can be seen by the PCs. I also have a hex map of this area which I use for calculating travel times and running hexcrawls, which is a DM-only document generated with Hexographer. 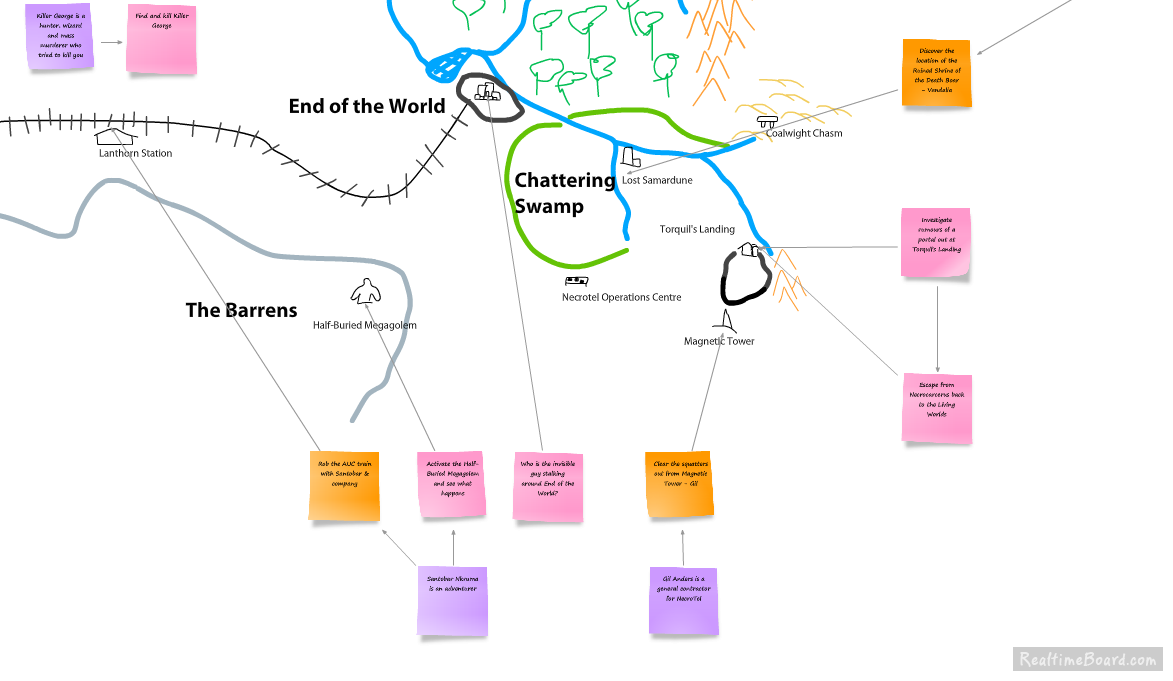 At other parts of this board (not shown), I've uploaded treasure maps, embedded a PDF of the Necrocarcerus 1.1 rules (and when 1.2 is done, I'll upload that in turn), and set up a map for a later adventure.
No comments: