A Few Add-Ons for the Black Hack

I'm putting together a "pick-up-and-go" campaign that's going to start with an as-yet-undetermined group of new roleplayers sometime in the next couple of months. I decided to give the Black Hack a try, and if I like it, I'll switch over to using it as my main OSR ruleset, instead of Swords and Wizardry Core / Complete.

While setting up for the campaign, I created the following documents:

1) A weapon table expanded to include bombs and guns, as well as rationalise which class can use which weapon. Download [pdf]. 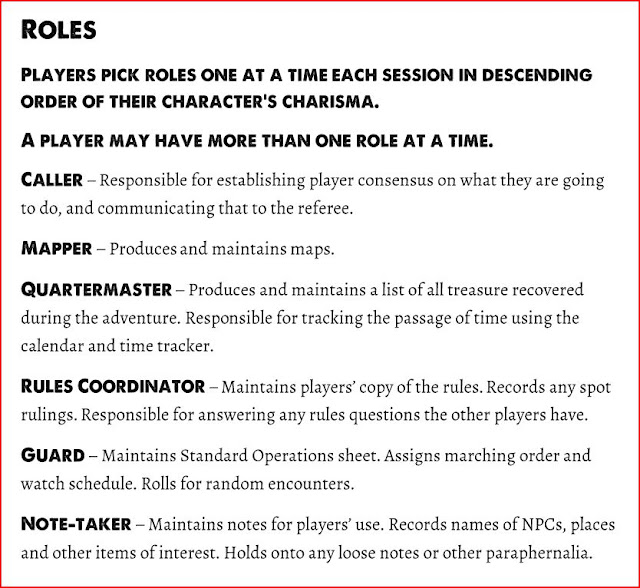 3) A levelling rubric for the Black Hack, which I will use in the upcoming campaign. The Black Hack tells the referee to assign a level whenever they think it's appropriate, but I think a clear rubric will help PCs plan their actions better and incentivise them to do interesting things. Download [pdf]. 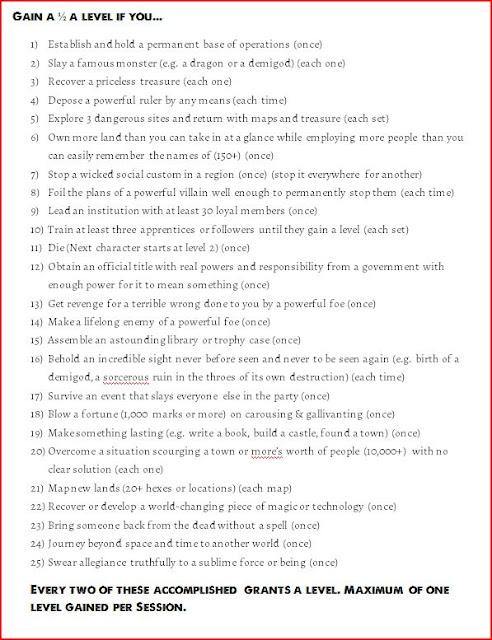 I bought Misty Isles of the Eld a few days ago and read it, which caused me to go back and reread Slumbering Ursine Dunes and Fever-Dreaming Marlinko (as well as rereading the two compendiums and the cosmology document). All of these works are all done by Chris Kutalik of Hills Cantons fame, and are set in his Hill Cantons setting, which mixes Vancian Dying-Earth-type absurdism with fantastical trappings drawn from medieval / early modern Eastern Europe, Northern Michigan, and a bunch of well-thought through D&Disms. My understanding is that there are at least two more forthcoming documents, which are referred to by various titles in the existing works, but mainly as "What Ho! Frog Demons" (another point crawl adventure similar to Misty Isles and Slumbering Ursine Dunes) and "the Kezmarok City Supplement" (an even larger city than Marlinko, though the suggestion appears to be that it will focus on the Cerulean Vaults portion of the undercity of Kezmarok).

Overall, I have a fairly positive impression of the Hill Cantons setting and the related works. The books are well-written and genuinely funny, but they also are clearly derived from a well-thought-through conception of what a world with D&Disms in it must include. In particular, all three books are written with a clear idea of how a group of antisocial, violent, impulsive adventurers would navigate them. This is true not only of the parts that are clearly adventure locations, but of the social situations as well. I'm sure anyone who reads modules regularly has encountered ones where the premises of social encounters seems to rely on PCs not acting like PCs, and / or where the NPCs act as if the idea that there are bands of magical murderhobos wandering around interfering in anything they please was a completely new idea they'd never had to deal with before. The Hill Cantons really almost assumes the reverse, and the situations the books present are therefore all the more robust for it.

Of the specific books:

Slumbering Ursine Dunes' strong points are well-realised factions, two good dungeons, evocative imagery and trappings, and its pointcrawl layout, where instead of a hex or a free-form map, the set-up layouts out the various points of interest that PCs are likely to encounter along the way. Its weak points are that it could use a little more set-up for referees. In particular, it needs a few adventure seeds that would bring PCs to it in the first place, push them to keep exploring, and keep them coming back when they suffer a set-back. There are a few quirks of layout that make information occasionally a bit unclear. In particular, there is a hermit who is mentioned without introduction in the major NPCs section, but who is only described in the pointcrawl map key. As well, the maps for the dungeon are found at the back of the book, rather than adjacent to the map keys for them.

Fever-Dreaming Marlinko's strong points are the clever and evocative writing, and the abundance of gaming-oriented material. The book explicitly tells you that rather than focusing on shopping lists and dull descriptions of shops, it's going to focus on the interesting bits, and it does a great job of this. You come out of it with a clear idea of what Marlinko is like as a city, and what parts to focus on. I do think the book would benefit from a slight reorganisation of the material. In particular, it looks like there's about four or five streams or tranches of adventure ideas which most things tie into, and it would be useful to have a table or other graphic arrangement that would help referees understand this, possibly with some clear inciting events listed for each tranche.

On a very short side note, one very nice thing about this book is that while it contains some puerile humour, this humour is not fundamentally misogynistic or homophobic in character. There are dwarven masseuses who offer "happy endings", but the joke is in the "joyless" character of such in a subversive contrast the usual "wenches and wine" depictions of sex work in adventure games. There are also giant eagle mounts who dump misogynists mid-flight.

I would say that if you were only going to pick up one of the three books, this would be it. I also think it should be your first purchase of the three (I bought them in the order they came out, where Fever-Dreaming Marlinko is the second in the series). Fever-Dreaming Marlinko contains adventure seeds and suggestions for both Slumbering Ursine Dunes and Misty Isles of the Eld, filling in the gap one might otherwise have for those adventures. If I were to run a mini-campaign on the current Hill Cantons material, it would go FDM to SUD, back to FDM, then off to MIE, then back to FDM for the wrap-up.

Misty Isles of the Eld's best point is really its organisation. The party will be dealing with a coordinated and professional opposition, and the book does a good job making the encounters and NPCs interesting while not forgetting that. There's a great deal of time spent laying out for referees the various resources the Eld (evil space elves from hell, with Melniboinean flourishes) have at hand and how they use them. I also appreciate how the book manages to make them weird and creepy without having to rely on much explicit gore or sex, instead using the occasional suggestive flourish to allow the imagination to expand in the space it leaves. I think overall this is an excellent product, but one thing it could use is a slightly clearer idea of the process the Eld are following to accomplish their goal (the goal itself is clearly laid out). PCs will encounter several of the things they're using (an imprisoned god, etc.) but it's not always clear how much of a hindrance messing with any specific component is. Does freeing the god mean the Eld's plans are doomed, or can they still accomplish them without it? Information about this, especially in a form where it's at least partially PC-facing, would be very useful for helping PCs focus their activity.

I'm looking forward to What Ho! Frog Demons and the Kezmarok supplement, and I would recommend that if you're interested in pointcrawls and ideas for how to do city-adventures well, these are excellent supplements to pick up.
1 comment:

Email ThisBlogThis!Share to TwitterShare to FacebookShare to Pinterest
Labels: Review

I've been seeing a lot of mentions of, and material for, the Black Hack lately, so I thought I'd pick it up and take look for myself. In broad strokes, it's basically an adaptation of elements of White Box Swords and Wizardry, Dungeon World, Castles and Crusades, and D&D 5e with some house rules thrown in at critical parts. Surprisingly, it looks like this mix works reasonably well. This will be a review of the game with the Additional Things supplementary PDF available for free download.

Overall, I think the Black Hack is good, but it's good because it's a mix of some great and inspired ideas with some very badly done ones, rather than because it's modestly well-done all the way through. The basic mechanic is d20-roll-under-stat to accomplish anything, with PCs making most rolls. i.e. they roll to avoid monster attacks instead of monster rolling to hit them.

The great and inspired ideas tend to be little ones that aid playing the game. I particularly like the new time system (moments and minutes), the usage die for consumable items, the resting mechanics (an OSR adaptation of the D&D 5e rest mechanics), and the use of opponents' HD as the main stat you have to track. From Additional Things, the tags for gear, the rules for panicking if one runs out of light, and the coin-dice rules are all very clever. These are all solid ideas, most of which could be integrated into any retroclone you're playing, and would add a great deal if they were.

The bad parts tend to be the more slapdash elements of the book. Firstly, the gear list is incomplete, lacking 1H weapons or bows in the gear list. Similarly, it has different weapon proficiencies by class, but these are just random lists of weapons, none of which are mechanically different from one another. The morale rules and the reaction rules should be simplified into the same set of rules, and the old 2d6 system was superior to the one in the Black Hack. The fighter class needs its ability reworded (Additional Things proposes one fix, and I see other versions repeatedly proposed or discussed in the community on G+). The gear list is the same slight alterations on the basic D&D 3.5 gear list that everyone's been using for a decade and a half now. Probably the worst of these various rules is the one for random encounters, which assumes that you're rolling every 15 minutes of real-world time, which I think is just unworkable in most situations.

After reading it, my general inclination is that I like it and want to play it, albeit with some heavy house-ruling. The chassis underlying that house ruling though, is generally pretty solid. If you like universal mechanics, rules-light systems, and / or systems where PCs do most of the rolling, I think you'd like it as well. Even if you don't, I suggest adapting the usage dice mechanics, the coin dice mechanics, the moments and minutes time tracking, and the rules for panicking in the dark for use in your own retroclone games.
No comments: