In the Emern game last night, the players created new characters, the survey team who will be exploring Isla de Naufragio on behalf of Hesh and their other characters, who have recently been given it as their fief. The survey team is mostly evil and mostly human, as a change from the other set of PCs, and they are almost all there on someone else's behalf, as the selection process was thoroughly corrupted by special interests.

Because of that, each PC drew an agenda card, representing a secondary goal they have in addition to the successful completion of their mission. If they didn't like it, we set it aside and they got another draw that they had to live with. The PCs are basically mapping and surveying hexes, while trying to find resources, eliminate monstrous threats to further settlement, and making contact with the natives. If they can clear 40 hexes, they'll get a premium, but at least 20 need to be mapped for satisfactory completion. They have 30 days to do this in, maybe 37 if they can work out a deal with the ship's captain who will be picking them up, and it takes at least 12 hours to survey a 5km apothegm hex, so it's a tight deadline that may require splitting the party.

The surveying party has Lieutenant Peter Gabriel, an evil elvish paladin, in charge of it; Bobo, a neutralish priest of the Sword, as chief surveyor assisted by Shaqueefa, a chaotic evil berserker; Sapporo Saki, a chaotic evil assassin, is the quartermaster, while Samuelson, a good human monk, is assistant quartermaster. Eugene, a human wizard, is the assessor responsible for finding resources and determining their value. Finally, Gruber Kelly, a neutral human ranger, is the expedition's guard. On a side note, the only reason I remember the alignments is because everyone said them aloud yesterday during character creation. 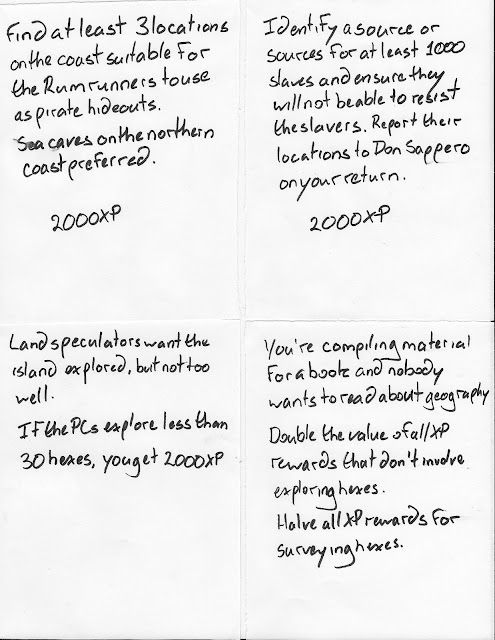 The agenda cards are basically there to stir up some dissension. PCs can talk about them in character if they wish, but can't reveal their cards to anyone else without paying 500XP on the spot. That means that PCs have to balance accomplishing their objectives vs. paying the cost to reveal. Most of the cards give enough XP that even if you pay the 500XP to reveal it to the other players, you'll still come out ahead, albeit not as much as if you didn't. The ones I'm posting here are four of the six that weren't chosen or were rejected, and there was a total pool of thirteen cards (there were going to be more, but I made some spelling mistakes or used unclear wording in the rush to get them done and had to rewrite some of the ones I wanted to make sure were in there). These ones tend to be fairly negative, but there were a few in there that were positive, pro-social ones, so that at least one person has a reason to keep everyone together and smooth over differences.