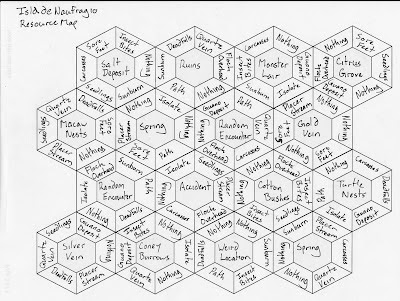 So last week the PCs got started on their exploration of Isla de Naufragio. I finally got around to drawing up some additional handouts to further help clarify and define what people do.

This resource map is for the assessor, Eugene. His job is to find resources on the island. He and Lt. Peter Gabriel, the expedition leader, get to decide how hard Eugene is going to look, and if anyone is going to accompany him. Whenever they enter a new hex, Eugene can pick up as many dice of whatever type he wants and drop them on the map. The total on the dice is the number of hours he's out there searching continuously for resources. The things the dice land on are what he finds.

Cotton, Cocoa and Citrus are the three vegetable resources, Gold, Silver and Salt are the three mineral resources, and Coney Burrows, Turtle Nests and Macaw Nests are the three animal resources. If the die lands on any of these, Eugene's player's job is note it down so they can claim an XP reward for it. Springs are not resources but are handy for water.

Some of the hex segments are good, some are bad, and some are neutral time-wasters. Good hex segments include placer streams, quartz veins, carcasses, guano deposits, flocks overhead, deadfalls, isolates and seedlings. Get six of one type of these, and you can trade them in as counting for a full "resource" of the appropriate type. There were originally going to be "salt licks" on here as well but I forgot to write them down and filled the spaces with "Nothing" instead, so mineral resources are a bit rarer, which is fine.

Paths are good in that they point to a path to an adjacent hex, in addition to any the surveyors find (more on that below). The direction of the hex segment is the direction the path goes.

Stuff like sore feet, sunburn, and insect bites tack on extra time. They roll an extra d6 for each one and add that many hours on.

Random encounters are random encounters off Random Encounter Table A. Accidents involve saving throws against damage. Monster Lair, Weird Location and Ruins are all special incidents, of which I have a number planned. 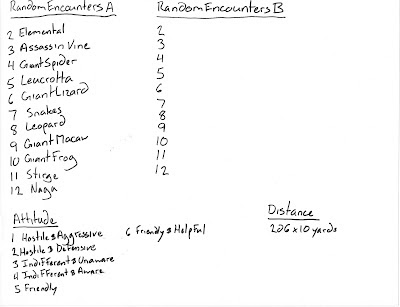 So I split the difference here in the two approaches I recommended when making this random encounter table. This will be handed off to the ranger who is the expedition's guard at an appropriate moment next session. Random Encounters A is the basic wildlife of the Isla de Naufragio, which the PCs will get a sense of next session. Random Encounters B is special encounters, which the PCs will gradually fill in the details of, either by having to roll on it (for example, when Eugene stumbles into a Monster Lair, Weird Location or Ruins, or when the surveyors get something unusual) or by discovering information about the island's monstrous inhabitants from other sources. 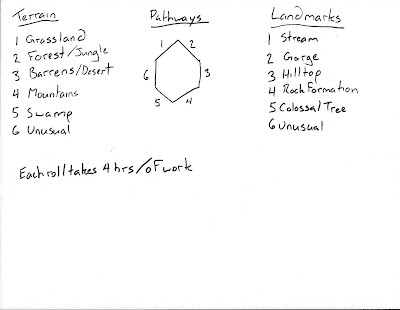 This is the surveyor's tables. I originally had a rigid schedule of 12 hours to survey, but I thought that was boring and I wanted to increase the players' agency here. I have two surveyor PCs, and one colours in the map (just as one of them in game is working as the cartographer) while the other rolls. Terrain tells you what type the hex is, pathways tells you where you can go out of the hex from, and landmarks help you avoid getting lost. Each roll requires 4 hours of work in game, and rerolls on landmarks and pathways are allowed by paying the time again. Unusual means a special location of some sort. For terrain, it could be a geyser field, a lost city and its suburbs, tar pits, etc. For landmarks, it could be a tower, a giant set of dragon bones, a flaming pillar, etc.

Unfortunately, I don't have the hardcopy map of the island that the surveyors are filling in or the minimap of the encampment set-up that the quartermaster PCs drew, or Lt. Peter Gabriel's schedule for the expedition, since they're all at the apartment we play at, but I'll grab them once this whole thing is done and stick them up here.