Who Do You Steal Stuff From In Necrocarcerus?

The Utilities
Evil megacorporations responsible for providing essential goods and services to the citizens of Necrocarcerus.

Awesome permits that let you get away with doing totally illegal things, rare magical materials like soul coal or radioactive dragonbone or real sunlight, high technology, tons of cash, secret records of forbidden projects that you can sell to the highest bidder, and tanks.

The bureaucracy of the afterlife and its various petty-warlord employees.

Giant payboxes full of obols, nepenthe, illicit magic items, weapons of mass destruction, maps and plans to long lost cities, sweet crowns and robes, uniforms so you can pretend to be the government, cool guns, your criminal record, airships.

Intelligent oozes from the living world of Braemon who killed their creators and have come to the afterlife to destroy their last remnants.

The battle lines of the Ooze Salient, secret ooze cells in the sewers of Downtown, oozoliths, refugee camps, black market souks, labyrinthine complexes built in the forgotten hinterlands of the Jail

Cults of the Irrelevant Gods

All the various religions knocking around in Necrocarcerus, from the All-Church of Lupo the Wolf to the Cult of Vra-Krakorn, He Who Consumes the Works of Man, to Roman Catholicism.

The intestines of Vra Krakorn, lambent pyre-chapels, cathedral-fortresses in the Kingdoms of the Saved, illegal gatherings of devotees in the major cities, the conning towers of hell-whales in Ocean Null, buried cave-libraries built into the sides of giant mountains, angel-staffed castles of ivory and bone in the Furylands

The jerks who built Necrocarcerus and are the reason you're here.

Nepenthe, parts to their secret proprietary installations so you can bring your obliterated friends back to unlife, weird mutating bits of reality, pre-Incident documents and other historical records, your tax forms, your open warrants, records of judgments that have been made against you in a court of law, mysterious dyes in colours that haven't been invented yet, prototypes of next year's animals, secret information about the location of the Codex of Cataclysm.

They're banks. They're all evil. They'll kill you in your sleep if you don't pay back the money they loaned you.

The wight-guarded vaults of the Red Sea Trading Company in Vigilant Pantagruel, the Vault of Teeth and Tears of the Bank of Necrocarcerus in the Jail, inside undead giant turtle-likes guarded by the citizen-ashigaru of the Spire

The rail companies are how most people get around. They're heavily armed to travel through the wilderness of Necrocarcerus. They're constantly on strike, with unions shooting at management and vice versa.

Money trains going to pay AUC forces, boxes of people who have been frozen, their secret and much loved proprietary coffee blend, free rides, cool motorbikes being transported to some rich dude, evidence that management is stiffing the workers, traveling circus monsters, train engines.

The illegal #111 from End-of-the-World across the border of the Lythmarch to Freedom, the dangerous and irregular #454 from the Halls of Redemption to Metrippus across the Ooze Salient, on a broken down caboose in the Wastes, on a blazing escape train from the Hive Towers of Grolanth to anywhere else, aboard armoured war-trains destined for the Furylands, aboard the mysterious #999 which travels to the living worlds on official AUC business

There's a bunch. The big ones are Thazul, who's busy conquering the living worlds, and Lyth, who's busy trying to conquer Necrocarcerus.

Imprisoned dream-smiths, the souls of long-dead heroes who came to slay them, ancient artefacts of ghastly effect, bizarre monster hybrids, sweet magical weapons and armour, crazy new spells no one else has, pure Prime Hyle, airships, the secrets of making coal wights and subnothings, imprisoned dream-smiths, incomprehensible machines that are required for evil rituals, their favourite intelligent centipede mounts, cool books no one else has a copy of.

Thazul's Tree of Torment, a magically shielded chamber in a dangling tower slung over the side of Necrocarcerus, the horror-factories of Freedom, the gullet of a giant undead centipede, from a stone circle with wraith chained to the eidolons, a portal to a hell-dimension, a vault inside the shell of a giant flying crab, a vast orb of magical darkness with undead writhing around inside of it, Lyth's Palace of the Unchained, a blasted wasteland that was once a living world, a reconstruction of a lich's tomb on this side of the afterlife, inside a drunken behemoth
No comments:

Email ThisBlogThis!Share to TwitterShare to FacebookShare to Pinterest
Labels: Necrocarcerus

Finally! This is a huge revision from version 1.1 based on playtesting with the Necrocarcerus crew. There had been tweaks and changes in almost every section, plus there have been multiple new sections added. As always, Necrocarcerus is meant to be a set of house rules for running Swords and Wizardry Complete. 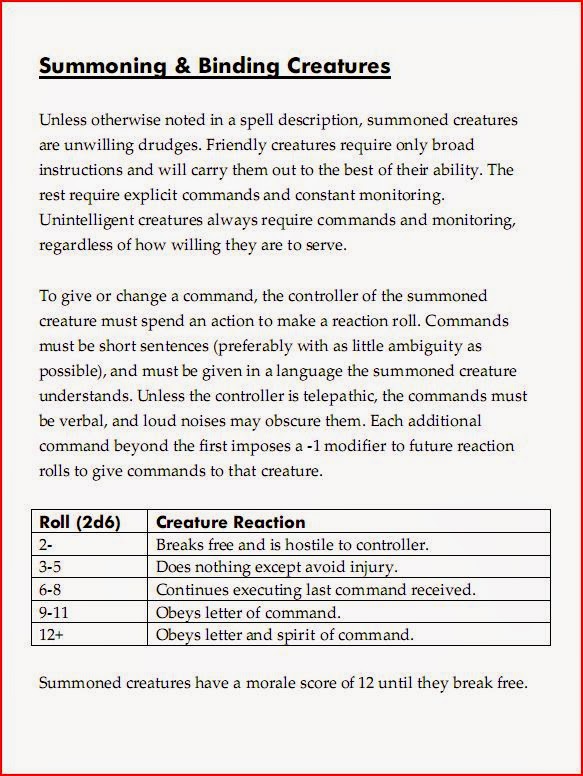 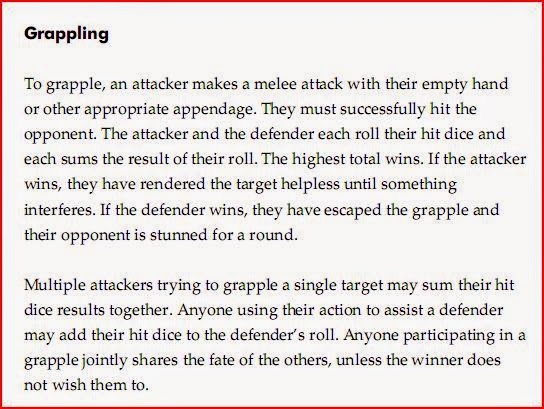 Plus rules for loans from the feared Bank of Necrocarcerus: 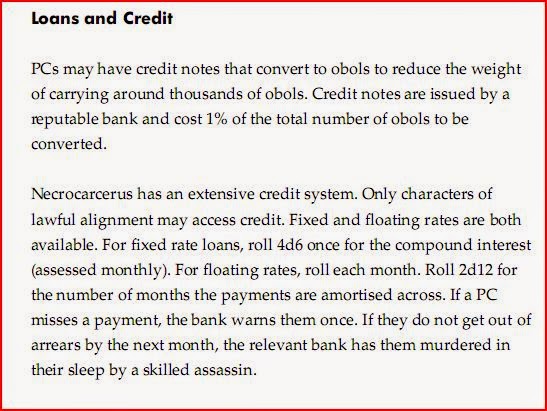 I use a d6-based group initiative roll resolved using some simple principles from Courtney Campbell. The basic principles are that one wants to roll high, with odd ties going to enemies, and even ties going to PCs (So a roll of 6 always favours the PCs), and initiative is rerolled each round. I also use a phase system within a round, so a high roll lets your side act first within each phase, though both sides act within each phase before moving on to the next phase.

As of Necrocarcerus version 1.2, I will also be using a skill system that includes the Tactics skill. Increasing the tactics skill allows one to roll a larger die type for one's initiative roll (d6 to d8 to d10 to a d12 maximum).

I've been debating a slight variation in the initiative rules. I haven't playtested this before, but I am proposing it to solicit feedback. The rule is that the roll on your die not only determines whether you go first or last, but how many actions your side can take during their turn. So a roll of 1 means no matter the number of PCs, your side must choose only one PC to act. A 6 means up to six actions may be taken, split amongst the PCs as they please (or amongst the monsters as you please). If there are more actions than PCs, the PCs may choose who acts a second time. The actions would not be split per phase, but could be distributed across each phase as each side pleased. Alternately, one might drop the phase system entirely and use simply this action distribution to push the PCs to make tactical choices.

Here are some outcomes I can foresee from adopting this system:

Single enemies become much tougher, especially single "boss" type monsters, since they will almost always be acting multiple times in a round.

Mobs become somewhat less overwhelming, though also easier to run, since only a portion of the mob will be acting in any given round.

This makes the Tactics skill much more valuable. Rolling a d12 to determine how many times you act per round is a huge advantage over opponents only rolling d6s (Monsters can have the Tactics skill).

Combats may take longer to resolve, since the median die result of a d6 (3.5) is less than the usual # of characters on each side who could act if they each got one action (I'm usually running games with 4+ PCs). On the other hand, the fewer number of actions per round might make rounds progress more quickly.

PCs would spend time each round resolving who gets to act in a given round. This might favour preferring certain characters acting, especially if they're somewhat mechanically superior to others, doubly rewarding players with powerful characters. As a positive side of this, it imposes scarcity limitations on PCs to help shape their decisions within a round.

If phases are retained, then PCs must make a separate decision each phase about how many actions they want to pursue in that phase. I would allow unused actions to cascade through the phases instead of requiring PCs to determine at the start of the round, after the initiative roll, which phase they wanted to dedicate the actions to. I think the order of phases will assist in this (movement is the second last phase, coming only before resolving spells), but I can foresee that there will probably be some weird edge case somewhere down the line where the PCs are like "We dump the remaining actions".

It could be difficult to plan between rounds, since one doesn't know how many actions will be coming up.

One side might be entirely ganked simply through a series of singular bad rolls each round - repeatedly rolling 1s while the other side rolls higher.

I'm not sure what my ruling would be if the PCs split into two independent groups fighting a single monster, or group of monsters. My inclination is to require them to still make a single initiative roll, but I can see a legitimate argument that the two groups, because they are acting independently, should make separate rolls (but then, of course, the lack of a boundary condition here allows one to drill the scope of the roll down to a single PC, which I would prefer not to do).

If anyone has tried this previously, I'd be interested in hearing your experiences.
No comments: