Magic and Religion in the Wolf Sea

The small area of the hexcrawl continent I'm focused will be called "The Wolf Sea" just because it sounds kind of cool and so I don't have to keep on calling it "the western bay".

Anyhow, here's a map of how you learn magic in the Wolf Sea and surrounds. Blue squares are common institutions that teach battle magic. Red squares are schools of sorcery, orange squares are religions, and purple squares are shamanic groups. Each type of blue square has its own spell list of battle magic spells, while each religion and sorcery school does as well. Each shamanic school teaches you to manipulate certain kinds of spirits. All this stuff will get covered in the write-ups of each group.

The blue square are the starting positions for PCs on this diagram, unless you start as a priest or a sorcerer, in which case you start on an orange or red square as appropriate. The arrows indicate institutional access. So if you want to say, join the Sailors of the Dream Sea, you'd either better be an initiate of the Void Drowned or Unknowable Sea, or a member of a psionic dojo. The actual transitions can arise organically in game, they don't need specific rules covering them. 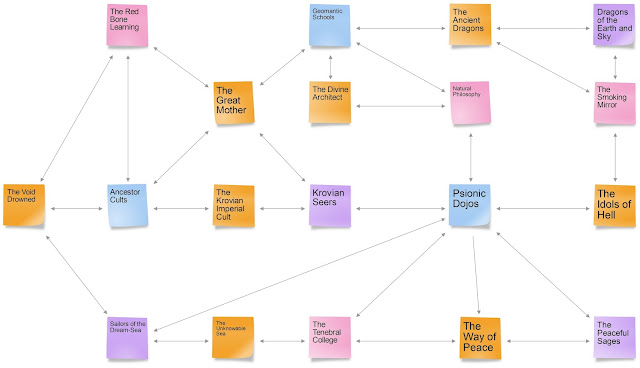 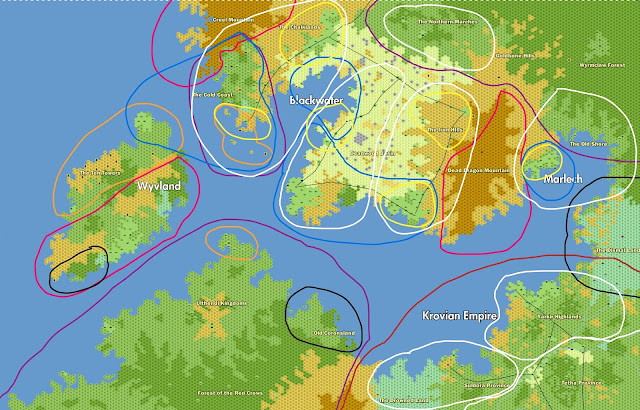 From this you can see that the Void Drowned and the Idols of Hell are mostly marginal, except for that big city of devil-worshippers controlling the southern half of Wyvland. The Ancient Dragons are trucking along strong in the hinterlands, but are almost gone in the heavily settled areas except for a rump presence in the westernmost region of Blackwater, while the Unknowable Sea is fading in popularity except amongst port-towns. The Way of Peace is a missionary religion spreading itself over the sea, while the Divine Architect is mostly popular in the cities of Blackwater and Marlech. The Krovian Empire forbids all churches other than its own unified Imperial Cult and the cult of the Great Mother. The Great Mother is popular almost everywhere, but the church is fragmented.

Most of these religions will crop up elsewhere in the campaign setting, as will new ones, while a few will be specific to this area.