Traps and curses are some of my favourite parts of dungeoncrawling. Here are a few I've been thinking of. I don't claim to have invented any of these (though I can't remember where I found the original inspiration for any of them). My memory of these has been prompted by rereading Grimtooth's Traps.

1) A chest in the centre of a room is bolted to the floor, with a clearly steel cable running from its lid into the ceiling. Opening the lid of the chest or cutting the cable causes the floor to drop and steel shutters to drop over the entrances- only a few feet down and with the doors only partially shut if the lid is merely opened, but far enough to take falling damage and completely seal the entrances if the cable is severed. Either way, the dropping floor should reveal vents by which some noxious or dangerous substance enters - poison gas, acid, yellow mold, green slime, or even merely large amounts of water.

PCs could know there will be trouble if they strummed or tapped the cable, which would cause the metal parts to rattle up above, if they checked the door arches after opening them to spot the shutters, or closely inspected the floor for seams, which would tell them parts of the floor were not connected to others. The trap could be reset by two strong people closing the lid's chest if the cable wasn't cut, or by stringing a new cable through the gearing up above and reattaching it to the lid below (a few hours work for an engineer if the materials are on hand, plus the same two strong people).

2) A floor with a slight depression forming a lip from nearby rooms. The floor is covered in metal marbles / ball bearings floating in oil. The walls are made of porous stone (pumice or the like) and weep small amounts of oil in over time to replace the stuff that dries out. Slow movement across the room is easy, but anyone trying to run will inevitably fall. If they carry a light source, it will start a raging inferno when it strikes the oil. Touching a wall to steady yourself is fine, but catching yourself before a fall is forceful enough to cause it to crumble slightly and increase the rate of oil flowing into the room. After three crumbles, the oil is ankle deep, after five it is up to the knees, and so on. The more oil, the more risk of a fire and the more damage it deals.

This trap should be fairly obvious, and is meant to signal an area as dangerous. It could be reset simply by refilling the reservoir of oil near the top. I think it works best in rooms with multiple entrances leading off into looping corridors, to increase the risk of a wandering monster chasing the PCs back through it. You could make this more difficult by adding a second trap (blowpipes in the walls firing knock-out darts or something) but that makes it even more likely to be a TPK.

3) Slats in the floor are actually triangular wedges that rotate freely but only in one direction. Stepping carelessly traps the foot and deals mild damage. It's possible to free someone without dealing more damage to their leg, but this is a noisy and slow affair, taking 1d4 turns of dismantling the slats, easing the foot out, etc. Each turn requires a wandering monster check. Wrenching the leg out will cause significantly more damage, possibly even crippling it until healing magic or surgery can restore it.

This trap can be noticed if the PCs are checking the floors, since the long thin slats made of metal should be distinct from other types of floors. The trap can be reset simply by rotating the triangular wedges back to being flat once the obstructions are removed. To make the trap nastier, you might want the space below the slats to be filled with serpents or green slime or another threat. I've found that acid and lava tend to make the trap too boring, since they either kill the PC right away from damage, or burn off the leg quickly enough to make the entrapment irrelevant. 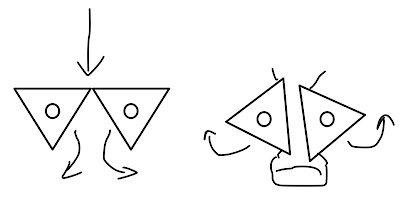 4) More of a puzzle, but one I've used several times to good effect. The PCs are faced with three colour-coded racks of containers of goop (I once made these the coloured brain-jellies of ritual sacrifices, with the victims' skulls for the containers). One rack is blue, one red, and one yellow. Alongside the rack are four pillars, one orange, one purple, one green and one brown. Alongside the rack is a small basin for mixing them together. The primary-colour coded chemicals smell sour and taste bad, but don't actually have any effects on their own when drunk individually.

Mixing the correct colour combinations of the primary-coloured goop produces potions. Only colours matter, not proportions (brown is produced either by mixing all three primaries, or by mixing any two differently-coloured secondary-colour potions). Orange produces potions of Cure Light Wounds, green produces hallucinatory potions of light (you glow, attracting more wandering monsters and being unable to sneak, while also tripping balls), purple produces emetic potions of Neutralise Poison. Brown produces instant death unless a save is made.

I recommend limiting the number of doses of each gunk to prevent the PCs from making off with hundreds of potions of Cure Light Wounds once they figure it out. I haven't experimented with this variation yet, but I think it might be fun to make the baseline potions weak (i.e. Slow Poison instead of Neutralise Poison for purple) and then require multiple doses of the same potion to be crafted and combined to get the stronger effects (so two doses of orange becomes a Cure Moderate Wounds potion, etc.). I also find the more happy you describe the green and brown pillars, and the less happy you describe the purple and orange ones, the more likely the PCs are to poison themselves. If you have cautious PCs, it might help to make the goop into incense, and the basin a brazier that fills the room with smoke that affects all of them at once.